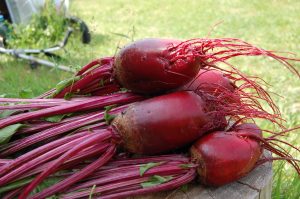 After several years of living in a tiny San Francisco apartment with my husband, we finally moved into our peninsula home that has a full kitchen (and a garage!). Due to a number of factors, including long commute times, crowded living conditions, plus abundant restaurants within walking distance, I had gotten out of the habit of cooking at home. It was something I wanted to get back into, for a number of reasons, including health, quality control, time spent in transit, cost savings, and sheer enjoyment of cooking. So when we moved, I set up my kitchen in the new space and got to work. But a problem that I faced when I was single–the last time I did any significant cooking–cropped up. We live in a time and place where you can have pretty much any food year round. By itself, this is a good thing, but it creates what’s been called the paradox of choice–if you can have anything, at any time, the sheer volume of choices can generate a lot of anxiety. I’ve faced this, and in the past have tended to fall into the habit of cooking the same set of familiar meals again and again. I wanted something better, especially now that I’m not just cooking for myself anymore.

But I found a solution that has been working very well for us–every other week, we have a farm share box delivered. The service we use is Farm Fresh to You, which has a variety of boxes of produce available for delivery at the interval of your choice. So now, a box of fresh, seasonal produce appears on our doorstep every other week. And I have to do something with this produce, which will go bad if we don’t eat it. So now I’ve limited myself to cooking with the contents of the box. I can–and do–supplement with trips to the grocery store, which is a quick drive. But using up what’s already in the fridge is a priority, and I’ve learned to cook with kale, dill, and beets, to name a few that I never had occasion to use before. When a box appeared with sweet potatoes, a quick search online found a recipe for sweet potato pie. I tried it and we enjoyed that pie for a week. I found a recipe to use up a bunch of parsley in a green olive-anchovy pasta sauce. I’d never had anchovies before, because I assumed I’d hate them like so many people claim to. Having finally tried them, I don’t know why I thought that, and I can’t wait for more parsley so I can make the sauce again. The previously mentioned beets became borscht, which I’d never had. I made roasted rosemary potatoes and paired it with a wilted greens salad–using up the beet greens–on the fly. I made a cilantro-garlic sauce to go over chicken and pasta. My husband tasted the sauce and liked it so much he immediately began imagining it as a spread on toast or other meats.

The selection changes from week to week, and not every meal I make is, or has to be our favorite. But I no longer have to come up with a varied list of meals from scratch. The produce in the box is seasonal and local, which means it’s traveled a shorter distance to us, which means it’s fresher and has more nutrients in it. I don’t feel strongly about the organic-vs-regular produce debate, but I don’t specifically object to organic produce, which this is. It’s true that we could also go to one of the farmers’ markets that are in the area. However, this would take me back to the issue of choice that was paralyzing for me–I would still have to plan meals and then schedule time to go and shop, which I don’t want to do. Perhaps paradoxically, by limiting my options, I’ve set up a situation where I’ve required myself to become a better cook, rely less on recipes than I ever did before, and meals are much more varied than I could have planned myself.